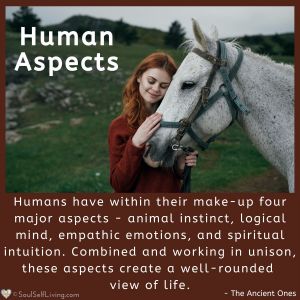 Humans have within their make-up four major aspects – animal instinct, logical mind, empathic emotions, and spiritual intuition. Combined and working in unison, these aspects create a well-rounded view of life. Utilize all your abilities to decipher for yourself the best action to take in any given circumstance.

Human Aspects:
Animal Instinct – Wikipedia: “Instinct or innate behavior is the inherent inclination of a living organism toward a particular behavior. The simplest example of an instinctive behavior is a fixed action pattern, in which a very short to medium length sequence of actions, without variation, are carried out in response to a clearly defined stimulus.

However, instinctive behaviors can also be variable and responsive to the environment. Any behavior is instinctive if it is performed without being based upon prior experience, that is, in the absence of learning.

Sea turtles, newly hatched on a beach, will automatically move toward the ocean. A joey climbs into its mother’s pouch upon being born. Honeybees communicate by dance the direction of a food source without formal instruction. Other examples include animal fighting, animal courtship behavior, internal escape functions, and building of nests.”

Logical Mind – Wiktionary: “Logic – A method of human thought that involves thinking in a linear, step-by-step manner about how a problem can be solved. Logic is the basis of many principles including the scientific method.”

Wikipedia: “Logic is the formal systematic study of the principles of valid inference and correct reasoning. Logic is used in most intellectual activities, but is studied primarily in the disciplines of philosophy, mathematics, semantics, and computer science. Logic examines general forms which arguments may take, which forms are valid, and which are fallacies. …Logic is often divided into two parts, inductive reasoning and deductive reasoning.”

Empathic Emotions – Wikipedia: “Empathy is the capacity to recognize and, to some extent, share feelings (such as sadness or happiness) that are being experienced by another sapient or semi-sapient being. Someone may need to have a certain amount of empathy before they are able to feel compassion.”

Spiritual Intuition – Wiktionary: “Intuition: 1. Immediate cognition without the use of conscious rational processes. 2. A perceptive insight gained by the use of this faculty.”

Remember to use all of yourself at all times. NOW is a good time to change your idea of yourself as a separate individual into a higher view as an interconnected Being. Become ALL that you are. <a href='https://twitter.com/intent/tweet?url=https%3A%2F%2F