From The Ancient Ones: 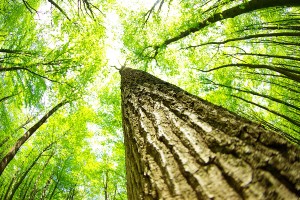 We are eternal beings of non-physical form. We make up a group of three, forming a council, for the guidance of Mankind, back to their original design as men and women. Our purpose is to assist everyone who is interested to develop their divine inner guidance, to direct themselves toward a humanity that is once again sacred and connected as One, in true camaraderie.

We welcome you to an experience with us. It is our desire to awaken the divine blueprint within each individual person to become their unique and passionate expression as designed by themselves before entering into this particular incarnation during this specific time period on planet Earth.

There is no reason to restrict the expression of who you are. There is no ‘judge’ out there to punish or reward. There is only you and your fellow humans making judgments on each other. The ALL, or as many like to call it, GOD, is all expression. Higher levels of the ALL bring forth greater expressions of joy, love and peace. Yet, it is all acceptable in the experience within the ALL. You are at choice to express whatever level of consciousness you desire. Take charge of your personal life experience.

Join us in our vision of humanity coming together as ONE united people sharing Earth with all living forms in harmony and prosperity. We will inform you of necessary changes for the evolution of mankind so you may make the shifts needed to bring forth the DIVINE PLAN that your Souls have agreed upon. 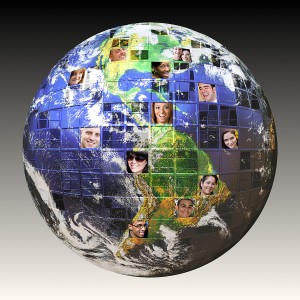 We are aware of the many dilemmas facing humanity’s continued existence. We would like to invite each individual to examine their way of living and make a conscious choice to change that which is not serving the whole of existence here on Earth.

We entreat you to have a greater role in raising the consciousness of the entire collective of humanity. Are you ready, willing and able to become the change you desire to experience on this planet? It all begins with YOU.

Many people are fed up with the way this ego-world is operated by leaders who do not consider the equivalence of all life. For centuries there have been power hungry rulers, fortune seeking commercial organizations, fanatically controlling religions, and self-aggrandized individuals whose consciousness is based upon separation and control over another.

There is a better way. When the authority of the Soul of each person is given credence, the direction of humanity will shift from oppressive ego-based fear into empowered unity of goodwill towards all.

The Game of this Ego-World

Have you noticed that there are several ways to look at a situation? Within the family unit, there is the point of view of the husband/father, wife/mother, eldest child, middle children, and the youngest, some with a male point of view and some with a female perspective. A family unit may also include extended family, such as grandparents, aunts, uncles, cousins, etc. Each person within the household will have their own ideas, agendas and desires. Who is right? How do you know what idea would work best for everyone involved?

Within a community there are many family units. Within a region there are many communities. Within a country there are numerous regions. And around the globe there are a number of countries. Humanity is a large group made up of individuals. Each person has his or her own desires. Each one is as important as the other. There is no rightful judge to proclaim sovereignty of one human over another.

Every rule or law is of man’s making. These regulations are decided upon and enforced by man. No one can rightfully claim authority over another. The game is designed by human beings. 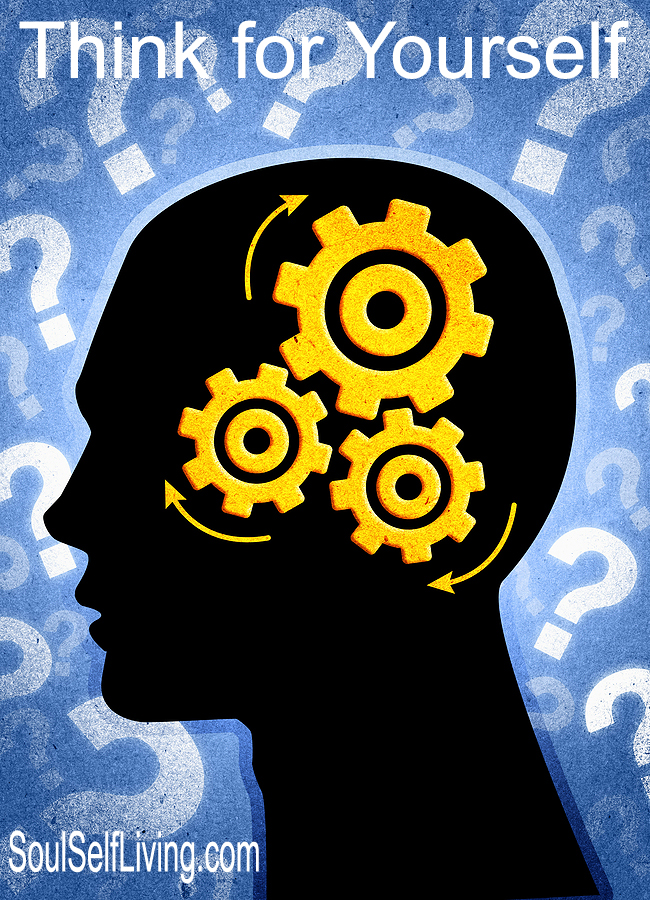 Are you aware that 99% of your thoughts have not originated from you? Since birth, most humans are indoctrinated with the thoughts held by their parents and caregivers. When a child enters school, they are taught to think the way of the accepted curriculum. A person’s religious beliefs are usually adopted by their family’s chosen religion. Political beliefs have been narrowed down within governments and offered as the only way. Even a person’s thoughts concerning finances are entrained within them by the time they reach puberty.

For centuries adolescents have endeavored to change what they can see does not work or make sense, usually through rebellion or protest. There comes a point when many just give up and accept the lot they find themselves in. Many times this loss of personal power turns into depression, despair and even suicide.

The way things currently are can change. It takes fortitude to withstand the opposing forces of the already existing ego-world. Tradition can only continue if people choose to perpetuate it. Take your stand on what you personally agree with. Replace what does not work with something better. Take the time to ponder the many questions that bubble forth within your mind. Think a new thought, if you dare.

What would that look like? Nobody can say. New thoughts do not have a past. Innovations come to those willing to think outside the limitations of past knowledge. How many original thoughts have you had in the span of your lifetime? Make sure they are truly original and not just knockoffs of someone else’s idea. Your honest reflection may be startling, indeed.

Most changes made in this ego-world are just slightly different calibers, degrees, or variations of the existing plan. Nothing completely new is ever received with ease. There is usually commercial ‘red tape,’ political agendas and religious opposition that must be dealt with before anything new can be permitted. This ego-world’s commercial, political and religious factions must first accept a new idea before it can be implemented.

It is in your hands as human beings to make the necessary changes to preserve the future of humanity. Your ideas are important. Think for yourselves. Find those of like mind to form the needed mass consciousness to create the changes you desire. Do your part to improve the living conditions for all of Earth’s inhabitants. Your future is dependent on making extreme changes to shift from this ego-based world to a Soul-based world. What new thoughts can you share? 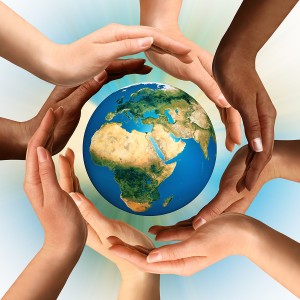 Co-creation together as a united humanity will ensure the changes you desire. There are already groups forming around the globe to encourage people’s involvement in creating a better future for every living creature on Earth. Sift through the groups and find one that speaks your passion. Join forces to enhance the movement and give of your time and energy to promote your cause.

Replace your compliant inactivity with passionate action. Make a difference in this world. Become involved with like-minded people to create a new future. Instead of complaining about or ignoring the problems of harmful environmental destruction, use your voice to alert others of the necessary changes that must take place in order to support an environment that supports ALL life.

When everyone becomes accountable for Earth’s well-being, you will see mass improvement. Get involved somehow. Take your place among your brothers and sisters. Unite together to bring peace, harmony and love to this world’s affairs.

You are what you have been waiting for, so STOP WAITING!

Humans have devised a world based upon inequitable economy. Would it not make more sense to create a governing system that provides the bare necessities of life, including housing, food, water, clothing and medical treatment? Leaving room for those who choose to upgrade for a cost? This would eliminate poverty, while still giving everyone the opportunity to improve their circumstances as they desire.

How can this world survive in its current state of affairs? Too many inhabitants are left to die of starvation, sickness and poverty. Where is the camaraderie? Where is the fellow feeling? Where is the Oneness?

Reach deep within yourself to find your humanity. Become the type of person that looks out for all of God’s creatures. Play a larger role in the shift in consciousness that is building momentum as people are awakening to the understanding that this world is made up of ideas that have been implemented by their predecessors and can easily be changed by those who are currently living here on Earth.

Break with tradition and choose a better way! It is up to YOU. 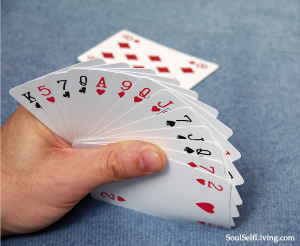 Let us use the analogy of a deck of playing cards to express how people can be viewed as living in differing levels of consciousness. You have 52 playing cards, plus two Jokers. See each one as the numeral value of the card, with Aces as highest value and Jokers as least value. The number cards are in the learning process, the face cards have mastered certain higher principles, the Aces have reached wholeness from which to teach, and the Jokers have left the game all together. Yet, the Jokers remain to provide powerful contrast from which others may make a choice: whether to follow these anti-lifers or the holistic teachers.

We offer this analogy not as a tool for judgment, for there is equivalence in all life. Rather, it is a fun way to choose which cards you want to hold in your hand. Everyone is part of THE ALL, yet each one expresses at differing levels of consciousness. Eventually each one will make it to the level of wholeness. And, choosing wisely whom you associate with will help you to build your strength.

Acceptance is a key to gaining mastery in life, as is compassion, wisdom, and service.

The Jokers are the ones to avoid if you desire to win with your hand of cards, so discard them immediately when they show up in your hand, for they will do their best to pull you off cour